The day Saints of 04 February. Rhabanus Maurus born around 780 in Mainz, placed with 15 years in the monastery of Fulda his monastic vows. For further education he came to Tours in France, where Abbot Alkumin was his teacher. This also gave him the name of Maurus, the Rhabanus then retained as a second acquisition. He was returned to Fulda teacher at the monastery school, then director of the school and 822 abbot of the monastery. 874 he was appointed archbishop in Mainz. He was a man of universal education, a promoter of education in the time of Charlemagne, hence its nickname "Teacher Germania". the scholar theologian and writer was also a major poet. The Pfingshymnus "Come Creator Spirit" is attributed to him. The "Grey House" in angle was the summer residence of the Archbishop and should, according to legend have fed 300 needy in a famine. 856 he said to have died in angle.

(From the Gospel for the day) 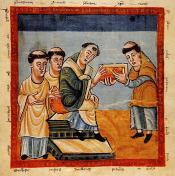 The Greiffenclau family can be traced to the time of Charlemagne traced under the Greiffenclaus served (Greiffenclau to Vollrath's) as ministerials. The Greiffenclaus moved to the right side of the Rhine, built the "Grey House" and planted vines on the southern slopes. Therefore, this is also the oldest winery in Germany. The oldest document, proven on wine sales to a convent, is from the year 1211. From 1320 the castle Vollrads was the headquarters of Greiffenclau. In the 13th century, the residential tower was built with moats. 1674 family was elevated to the realm baron. The other lap buildings are more recent.

In the area of "horror house" a benefice was built. Today is the Rhabanus Maurus kindergarten.

In the 80/90 years, the "Grey House" has been restored and used as Spitzenrestaurat. After the suicide of the last count of possession passed to the NASPA. The Grey House, was unfortunately to Frankfurt.

Possibly it is used again for the public. 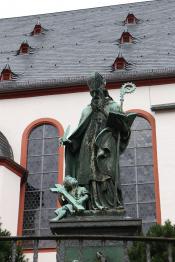 The Brentano House since 1789 the summer house of v. Brentano family in Frankfurt. Mobilar, carpets and wallpapers are often still originals. 2014 House of Udo v. Brentano was sold to the Hessian State. The house was one of the centers of the Romantic Rhine and served the family of Brentano as a summer residence. For many guests from politics and culture who dropped here include Wolfgang von Goethe, the Brothers Grimm and other Freiherr vom Stein.

At the center of home life, the great hall was on the first floor, because connecting the bedroom and study in 1814 and 1815, Goethe took during his stay and were bebehalten in the same state.

Clemens von Brentano is regarded as the main representative of Rheinromatik, he was rare guest in the Brentano house. Very often Bettina was Brentano in angle with it of course, Achim von Arnim and her future husband.

Also tragic events gave it. From allegedly vermähter love the poet Koroline of Günderode stabbed on the Rhine of angle. 1780 - 1806 A plaque located on the east side of the Winkler cemetery. 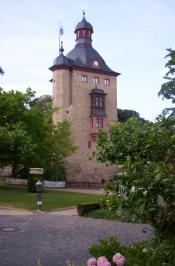 Already before 1000 there was a single-nave, nottonische chapel at the site of today's basilica. After 1108 lived Augustinian choir women in a small by the Mainz ministerials Wulverich of angle, a member of the family Greiffenclau, donated in honor of St. Aegidius monastery. The chapel is replaced 1118-1131 by today's three-aisle construction. From 1263, the basilica is the parish church of the municipality Mittelheim. Since 1448 the monastery Gottestal and the pin St.Viktor of Mainz are obliged to obtain the Basilica. The church receives 1511 an elaborately carved pulpit from the workshop of Erhart Falckener. In the period 1699-1720 the St.Viktor-pin and the family of Greiffenclau castle Vollrads for the high altar and the decor in the Baroque style care. As part of the renovations 1903.1938 and 1952, the Basilica was restored to its original state Romanesque. The dating from the 10th century foundations of Ottonian previous building of the Basilica are exposed 1938th

Northern side apse late Gothic Pieta made of terracotta donated (1420) of a wine merchant's family in the 19th century.